Once upon a time, I decided it is a good time to upgrade the version of gcc compiler we use in our ARM926-based firmware project. Historically, this project uses gcc version 4.6, which is quite outdated nowadays (January 2018). In a different project, built around ARM-Cortex, we already successfully use the gcc version 5.4.1 (Linaro release in January 2017), so I wanted to upgrade our ARM926 project to this newer gcc version.

The first problem we encounter is a simple assembly syntax error:

For some reason, our original assembler code used ‘.’ and ‘_’ interchengeably:

The correct code must be:

Now the compilation finishes without warnings, and the final ELF file is produced just fine. Yet, when it is loaded into the embedded system via Lauterbach debugger, there is a strange error during memory verification:

Hmm… Removing the option /VERIFY from LOAD gets us past the error, however, assembly code displayed by debugger is quite wrong. As shown below, the debugger thinks that the main() starts with ‘nop’ and ‘bx r14’ (subroutine call), which is completely bogus: 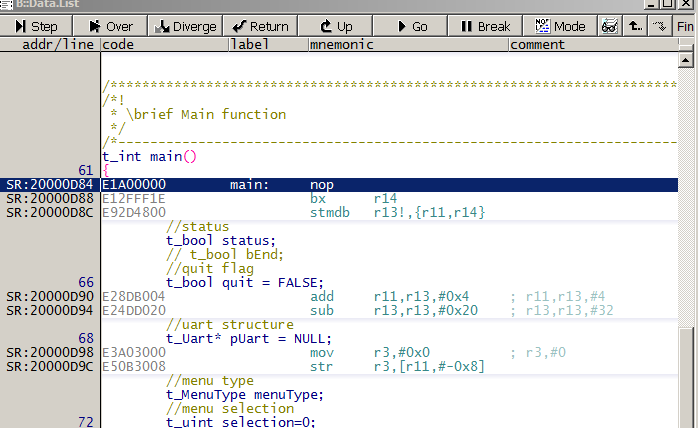 It seems as if all symbols are shifted around, and nothing quite matches up. Running the code comes to a crash somewhere in the startup.

Normal disassembly via ‘objdump -s’ shows that itcm_code has an offset: it should start at physical address 0x0000, but it starts from 0x0040:

It is not clear at all why this happens…

Finally, a full disassembly of all sections in the ELF file, including the data sections, reveals where the problem lies:

The new compiler toolchain inserts a special unique build-ID to the output binary, and if it is explicitly not told where to place it, it ends up in the worst place possible – before the start code and right in the interrupt vector table.

There are at least two solutions to this: 1) use gcc option ‘-Wl,–build-id=none’ to disable the feature completely, or 2) put the build ID in the ELF file at a place where it makes no harm, e.g. after the end of code. This is done by adding the following instructions in a suitable place into the linker script:

After the linker script is fixed, the software starts and runs just fine, but strangely only up to the first interrupt…

We have already fixed two problems: the assembly syntax problem, and the linker build-ID problem. The third problem is the most puzzling one: the program starts and runs correctly, but after the first interrupt is served, no further interrupts are ever served. The processor happily continues running the main application code, but no ISRs are ever entered again. Yet the identical code compiled with the old compiler 4.6 works perfectly. What could be a problem now?

This is execution state before the first interrupt is raised:

This is inside interrupt service route, serving the first IRQ:

The ISR finishes its work, and returns back to the application code:

After that, no further interrupts are ever served…

Perhaps you see the problem right away in the screenshots, but it took me half a day to spot it.

Look in the last picture in the right window labelled ‘REGISTERS’. The left-most column in the REGISTERS window shows from top to bottom the processor flags (N, Z , C, …) and after that the processor state. It shows the processor is running in the… IRQ state! Yet the program counter is already back in the main application code.

Let’s see now how the ISR function is defined in our C code:

The prototype already has the __attribute__((interrupt(“IRQ”))), and anyway it works in the old gcc-4.6 quite well, so where’s the issue? Let’s compare codes generated by both compilers. This is the ISR function epilogue of main_irq_handler as generated by the good old gcc-4.6:

So the character ‘^’ is a special suffix that must be used exactly at the return from ISR. But the new code generated by gcc-5.4.1 uses the normal return with ‘pop’!

Now it is becoming clear why only the first interrupt request is ever served. Due to a software bug in our ISR epilogue the processor does not recognize that ISR has ended. The CPU remains in the IRQ state even after a formal return to the main application code, and thus it cannot receive any further IRQs.

At this point, it is a good idea to simply test if another compiler works better. And yes, in gcc-7.2.1, which is the current newest Linaro release in January 2018, the code works yet again well. We evidently have hit a bug in gcc-5.4.1 in its ARM926 ISR code generation path.

In conclusion, what I have learned: