I worked on project ADVANCE during my 6 months stay at Heriot Watt University in Edinburgh. This endeavour was kindly arranged and supported by prof. Scholz.

In ADVANCE the project goal was to develop general methods for optimization of parallel systems, composed of computing boxes and communication streams, connected in a network. System infrastructure would observe execution in boxes, gather statistics, and construct a model of the system. Based on the model the system would automatically optimize placement of boxes on compute nodes (processor cores).

My task was to integrate runtime system of the SaC language with the implementation of the S-Net language. S-Net is a coordination language for describing networks of communicating (black) boxes. Boxes my run code created (theoretically) in any language, e.g. in C or in SaC. 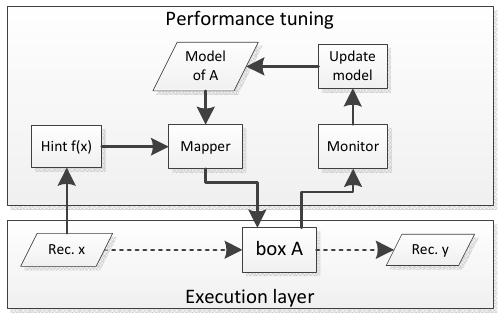